Empowering Students to Learn the Lessons of Labor History

You are here: Home » Empowering Students to Learn the Lessons of Labor History 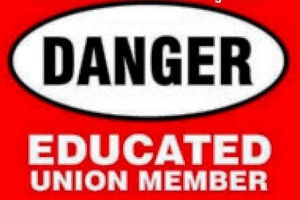 Connecticut Senate Bill 963 was recently PASSED and signed into law by that state’s Governor. The bill will allow a curriculum addition that includes labor history.

When the bill passed with a 24 to 9 vote in the legislature’s upper chamber, state Sen. President Martin Looney expressed the value of exposing students to labor history.

“The children of Connecticut have to know that many of the things they take for granted in terms of rights were not freely given by employers,” he said from the Senate floor. Sen. Looney added, those rights “had to be fought for by workers who showed great courage and made great sacrifice.”

AFT Connecticut Secretary-Treasurer Ed Leavy has for each of the past several years testified in support of similar legislation at the State Capitol. As both a long-time educator and unionist he has passionately made the case for empowering students to learn the lessons of labor history.
“Life as we know it today would be impossible without the contribution of organized labor,” Leavy told the legislature’s Education Committee in February. “The men and women who struggled against deplorable working conditions, bias and abuse deserved the right to be remembered,” he said.

According to the CT News Junkie: Rep. Ed Vargas, D-Hartford, said there is a need for this legislation because traditionally history has been taught from the point of view of the kings, queens, presidents, and captains of industry.

“We hear about Henry Ford, David Rockefeller, the Vanderbilts . . . and sometimes students would get the idea that history is driven by a few people in leadership positions,” Vargas, a former teacher, said.

This is especially true of West Virginia. The history of our state revolves around the Civil War and the contributions of the coal industry to our state’s economy, but ignores the West Virginia Mine Wars, the strikes, and injustices in the coal fields of our state. Also ignored is the attempts by the coal operators at enslaving West Virginia citizens by the hiring and maintaining a

militia of private detectives, or “gun thugs” to enforce and police their coal camps,  the paying of wages in the form of company scrip redeemable only at the company owned store, the cheating of miners pay by corrupt scale operators (since miners were paid by the ton), and other injustices that dehumanized and emasculated the miners and their families.

One of the most celebrated events  in our country’s history is the historic Gunfight at the O.K. Corral that occured in Tombstone, Arizona, on October 26th, 1881. In the 30 second gun battle, Wyatt Earp (pictured at left) and his brothers Virgil and Morgan faced off against the outlaw cowboy gang of the Clantons. Thirty shots were fired, three cowboys were killed, and famed gambler “Doc” Holliday and Virgil Earp were wounded. The town of Tombstone still profits from the lore of the legendary battle.

What happened in Arizona can’t hold a candle with the events that occured in southern West Virginia in 1920, though the events share many of the same similarities. At the turn of the century, the industrial revolution was maturing into the behemoth it would later become, the industry that would win two World Wars, and make America the Superpower it is. The whole of American industry relied on one common fuel; coal.

Yes, coal; which is under attack as a dirty fuel, is the prime mover of the entire industrial revolution.

The Industrial Revolution was also a time for great social upheavals, as the rich became powerful and the previously agrarian workforce adjusted and learned to work in the factories and mines. This was long before laws and regulations that protected workers safety on the job or restricted the power of corporations. Workers were left to fend for themselves, and the best way workers found to do this was by organizing union. In 1920, unions were still not sanctioned or protected by the federal government, the Wagner Act still being fifteen years away.

The situation in West Virginia’s coal fields was a broiling cauldren, as miners fought for better treatment and the United Mine Workers sought to organize them. If a miner was caught talking for the union, he and his family were immediately evicted, by gunpoint, from their company houses. Tent colonies appeared deep in the hollows not owned by the coal companies, who had come to the area decades before and cheated landowners out of their land.  The tent colonies swelled, as more and more workers, including blacks that were brought in from the deep south and immigrants fresh off the boat, joined the strikers in refusing to work in the dangerous and toxic conditions for such meager pay. These colonies were often the target of ambush attacks by the company hired “gun thugs”, who hoped to scare and intimidate the miners back into the arms of the company.

In the town of Matewan, Sherrif Sid Hatfield pictured below) had tried his hand at coal mining. he knew too well the conditions in those mines and decided to opt out of mining for a career in law enforcement. The coal company carried on evictions all around Matewan, but Sid forbid such evictions within his jurisdiction, often facing off the company’s hired guns.

In January, 1920, the tense situation exploded. Baldwin-Felts gun thugs, led by the brother of one of the agency’s founders brother, marched through the town of Matewan to carry out evictions and bring force to bear on the striking miners. Sid Hatfield, Matewan Mayor Cabel Testerman, as well as several armed miners met the armed party on the railyard siding in town. Words were exchanged and the ensuing gun battle left ten dead as hundreds of bullets rang out.

The sound of gunfire was no stranger to these mountains, as the Civil War and famed fueders Anderson “Devil Anse” Hatfield and Randall Mc Coy had all happened in West Virginia. Not only that, hunting and trapping had always been and still is a way of life in West Virginia, as well as the frontier explorers who battled their way into the area against native Americans.

The difference between what happened at the O.K. Corral and Battle of Matewan is that Matewan is part of labor’s history. Wyatt Earp was tried in a kangaroo court for the killings in Tombstone, just as Sid Hatfield was for the ones in Matewan. When the powers that be couldn’t rig the court, they attempted ambushes. Wyatt lost his brother, Morgan, and his other brother Virgil was maimed. Syd Hatfield was ambushed by a spy the coal company had sewn into the ranks of miners on the steps of the McDowell County Courthouse in Welch, WV (grave pictured left).

Both events shone the light of public opinion on unjust situations that forced the United States government to act for the betterment of it’s citizenry, yet only one is celebrated in film and legend.

Congratulations to the Connecticut lawmakers who recognize that it is about time that American children be taught the other side of the story of America!