You are here: Home » Insubordination

Ella Bloor was having a bad day in the food co-op kitchen. Breakfast burritos sold out early, so she had to make more, making her late in getting the co-op’s signature cookies into the oven. The shipping and receiving supervisor came up to her and said, “Go move the ice cream delivery into the walk-in freezer.” “No way,” said Ella. “I’ve got to make sure the cookies don’t burn. And our contract says I don’t have to do work outside of my department.” “I’m telling you to get over there and move that ice cream delivery,” yelled the supervisor. “If you don’t, you’ll be fired for insubordination!”

Sally, the department Steward, went into the manager’s office. “We have to talk about your supervisor Ralph. He’s out there threatening Ella if she doesn’t do work outside of her department.” Benito, the shift manager, said, “I’m the one who told him to get Ella off her butt and to move that delivery. I don’t have time to talk about this now–see me tomorrow.” “No way,” said Sally. “We’re going to talk about this now.” “Oh yeah?” snarled Benito, “Get out of my office or I’ll have you fired for insubordination also.”

Management loves power. The ability to threaten workers with punishment for being insubordinate is a tool that many managers use to enforce their power.

For many union folks, the whole idea of workers being punished for being “insubordinate” to bosses is insulting and discriminatory. This is one topic where the class bias of labor law becomes clear. Management is considered better than workers and workers are considered inferior to management. It is degrading and openly biased against the working class, but we have to deal with it. More on this later.

Here is how one management document describes insubordination:

Insubordination is a deliberate and inexcusable refusal to obey a reasonable order which relates to an employee’s job function.

Employees may not decide for themselves which instructions they will follow and which they will not.

This is how most arbitrators or the National Labor Relations Board (NLRB) would describe insubordination. BUT there are different levels of insubordination and the behavior of management often has an impact on whether the actions of an employee are considered insubordinate or not.

Guideline to Use When Investigating an Employer Charge of Insubordination

There are two basic tests for insubordination. (1) Was the worker given a clear direct order to do something? (2) Did the worker clearly know the consequences of refusing the direct order?

This usually means the management person giving the direct order must tell the worker what will happen if they refuse the order. This does not mean that the boss can immediately give a worker a direct order with the threat of punishment and not have to listen to the worker’s objections. Employees do have the right to question and argue about an order given by their boss.

It is not insubordination if a manager tells a worker to do something and the worker responds by asking questions or giving their reasons why they shouldn’t have to do what the boss wants.

It is not insubordination if the worker asks to have a Steward present to explain to management how the order given violates the union contract.

It is not insubordination if following the direct order will immediately put the worker or other workers’ lives in danger. The threat of physical harm, however, has to be real and immediate.

It may become insubordination if the worker consistently refuses to do what the boss wants after being directly ordered to go perform the task.

It may be insubordination if the worker does not argue with management but never does what he/she has been ordered to do.

What should a worker do if following the order management gives will cause damage to a machine, produce a poor product or result in inferior services provided? The worker should clearly point out to management what the bad results of their order will be and ask for a witness to hear the warning the worker is giving management. If the worker does this then they generally cannot be disciplined for the resulting damage or inferior product/services.

If a worker is charged with insubordination, the Steward should perform an investigation of the situation surrounding the events. Sometimes workers who have been charged with insubordination because they talked back to managers have been cleared when the investigation revealed that a manager harassed them. However, in some of those cases they were still disciplined because they used profanity.

“Shop talk,” such as profanity or the use of salty language, is not automatically grounds for insubordination. Here again there are many factors involved. How much shop talk goes on, on a regular basis? Do managers use shop talk? Do managers and workers use shop talk when talking to each other? Even though there may be shop talk as part of the regular day-to-day life of the workplace, a worker may be charged with insubordination if he/she uses an excessive amount towards a supervisor after having been asked to do something.

In another example of class bias in dealing with insubordination, arbitrators look at whether or not the supposed insubordination takes place in front of other workers. Because they believe that the management person is the “master,” they tend to rule more harshly against workers if the “master” is ridiculed or disobeyed in front of other “servants.” In some cases arbitrators have ruled against workers when they bragged to other workers about what they called the boss in private. 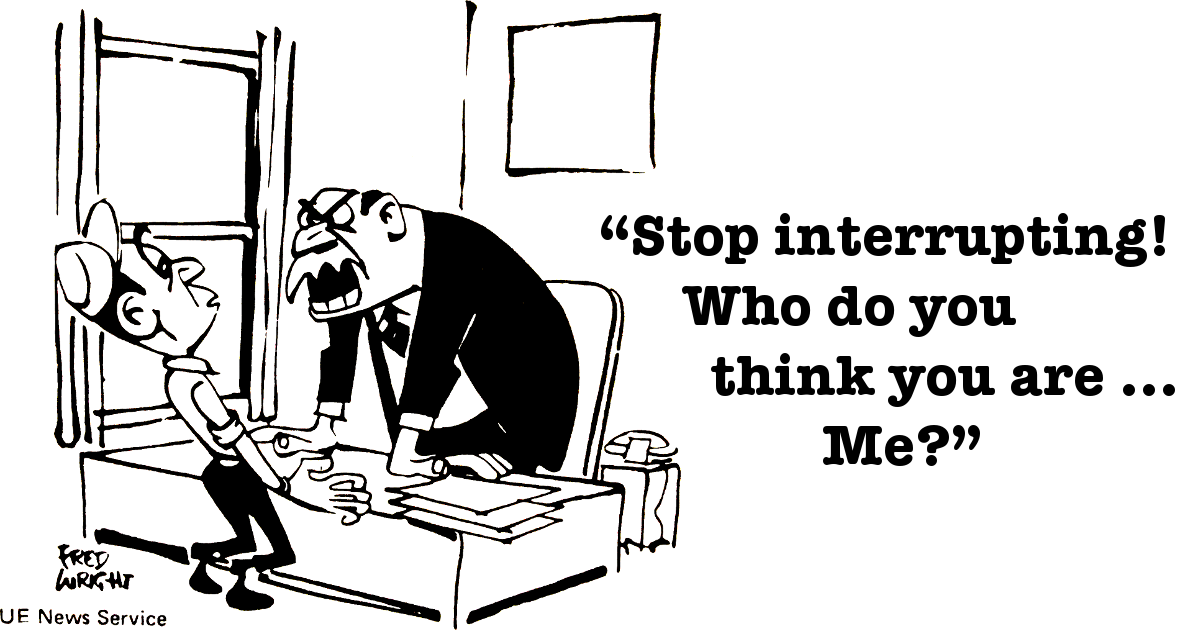 However, Stewards should take note of the General Motors NLRB ruling issued in July 2020. This new ruling “recognizes employers’ right to maintain order and respect.” It further says, “It is reasonable for employers to expect employees to engage all such [concerted activities] with a modicum of civility.” Until this ruling is overturned, Stewards should be cautious about using salty language in meetings with management.

What about Ella and Sally?

The situation with Ella is a classic case of a boss harassing a worker, but Ella needs to be careful since she was given a direct order and told what will happen to her if she refuses. On the other hand Ella has a right to argue her case and the boss clearly jumped the gun by threatening her right away.

Sally is in her right to stay in the boss’s office and continue arguing the case. She is in a grievance situation and therefore Benito cannot just dismiss her and refuse to discuss the situation. His threatening of her is also a violation of the NLRA, because a Steward cannot be threatened for doing her duty to represent workers. It is probably also a violation of the contract which says there will be no discrimination against the Union.

Here is another blatantly class-biased ruling that the National Labor Relations Board (NLRB) issued almost immediately after the passage of the National Labor Relations Act in 1936. There is nothing in the law nor in the debate in Congress that states that management is superior to labor and that management orders take preference over labor agreements. Nevertheless, that is what this rule, that we are all too familiar with, states.

Workers are expected to obey management, even if what management clearly wants to do is illegal under the contract, and then afterwards the workers can file a grievance.

How did this come about? The members of the NLRB looked to past legal precedent, rather than what the new law actually said, when they made this ruling. In their minds the master-servant relationship between bosses and workers was clearly established in this country.

The notion of insubordination calls us to look back at the horrendous specter of slavery and oppression. Here is what the Virginia law “An Act Concerning Servants and Slaves” said in 1705:

…all servants shall faithfully and obediently, all the whole time of their service, do all their masters or owners just and lawful commands. And if any servant shall resist the master, or mistress, or overseer, or offer violence to any of them, the said servant shall, for every such offence, be adjudged to serve his or her said master or owner, one whole year after the time, by indenture, custom, or former order of court, shall be expired.

The law provided this type of punishment, along with whipping, for servants who were poor English or Irish workers. African slaves who disobeyed their masters could be murdered and the masters were, by this law, absolved of all charges.

It was this type of “law” that helped establish how bosses are allowed to treat workers today. However, a strong steward system enforcing a good union contract is the way workers can win some measure of fair treatment in the workplace.

← Nobody WANTS a Union!
Plant Closings (WARN and Warning Signs) →