Nobody WANTS a Union!

You are here: Home » Nobody WANTS a Union! 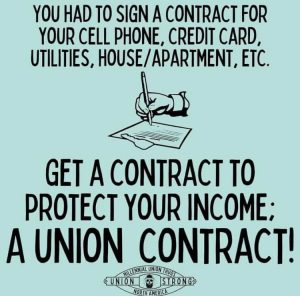 Nobody wants a union. Seems an odd statement to show up on any Local’s website; a bold, declarative statement that kicks open the mind of the reader and sparks the thought process of any sane union member. So let’s examine it!

Having a union means you have to pay dues, even though it’s a proven fact that union members earn almost 30% more in wages and benefits than unorganized, non-union workers. Union members are also more apt to have protected health and retirement benefits.

Having a union means that you have to attend union meetings, where some members too often whittle and fritter away the time arguing over things specific only to their department, or even worse, to just them. It’s easy to forget the important issues that get hashed out.

Having a union means you have to decide and vote on those fellow friends and co-workers who will lead your union, and in what capacity. They could be a steward, treasurer, trustee, or even the President. You have to show up and then pick and choose the unlucky devil, and then see them sentenced them to a thankless job filled with endless meetings with the company and members who don’t know the difference between a gripe and a grievance for three years!

So what having a UNION means is that you have the opportunity and responsibility of taking an active role in matters concerning your employment, your future, and for some that may be too much to ask or they may not appreciate the say being a union member affords them.

No, the truth is that nobody WANTS a union, that is until they NEED it! 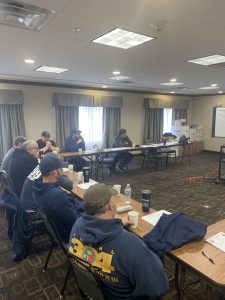 As Utility Workers, we are responsible for million of dollars of equipment that must run to provide a vital service to the communities and people we serve, and we work for one of the nation’s most powerful and influential business sectors in the American economy; the energy sector. They have layers upon layers of disposable executives and mid-level managers,  whole divisions of lawyers and lobbyists, and social, political, and business connections that form a solid shield of scapegoats that protects them from all responsibility or liability.

The rest of the workforce are simply tools the company use, and anybody who’s ever been in a technical trade knows that a bad mechanic always blames his tools. Like any tool, you are used until you break or a better tool comes along.

One of our Local’s biggest problems that many of us in the energy sector face is the huge turnover in people. Once one of the oldest worker demographic, we’ve been deluded with fresh young faces while seasoned and experienced workers retire. Not only does the knowledge and talent go with them, but so does he historical and mature intellect of that union member in matters concerning the company and union.

Soon, too few present members know of the struggles and issues that came before them and their are too few “old” members left to teach them. 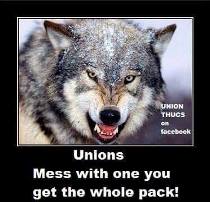 Unions love to talk about the old days, especially in West Virginia which has some of the most violent histories and colorful characters ever known. They brag how workers had to overcome violence, prejudice, and cultural barriers to convince the workers to unite for the common good. While they revel in the stories of past victories, unions have a blind spot for the lessons learned by their foes in business

Chambers of Commerce are more prevalent in cities all over our country, like union halls used to be,  because those in charge learned how to organize and unite. This gives them more resources to hire those to teach their front line managers how to concoct reasonable sounding lies, manipulate, and divide and conquer over their employees. They would readily agree that, “nobody needs a union.”

UWUA Local 304 is only a little over a decade old. We’re still evolving and maturing as a union members, but we’ll all get there together!

Read about UWUA Local 304’s journey to becoming YOUR union by clicking here!

← Breaking in a New Boss
Insubordination →

Service + Solidarity Spotlight: Oregon AFL-CIO Thanks Allies for Postcard Signing Event
Your Rights as an American: Pass the PRO Act
Protect Workers and Democracy: In the States Roundup