You are here: Home » Support the PRO Act! 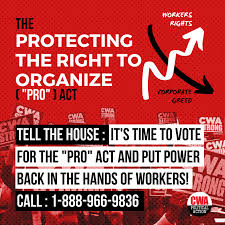 UWUA Local 304 was voted as the exclusive bargaining unit for employees of Harrison Power Station in 2010, which is common knowledge. What’s NOT common knowledge is the fight and struggle, which started in 2008, to form and organize support for a union in our workplace.

We have a lot of new faces in our plant. The demographics of power plant workers used to be one of the oldest of any major industry in the U.S. according to the Bureau of Labor Statistics (BLS). Even with the plant closures all around us, older workers have elected to get out and retire, taking their knowledge and experience out the door with them.

While utility companies scramble to develop training to fill the knowledge gap, unions also have a gap to fill when it comes to letting young worker know what sacrifices came before them to secure their rights and benefits of being union members.

Long established unions, that were formed thirty or more years ago, often have to re-claim their activist roots when times get tough, but 304 has never lost those attributes. Maybe it was the four years we spent fighting for a first contract, or the attempt to decertify our union before we even got a first contract that hardened our Local’s activist tendencies.

More than likely, it was the actions taken by our employer during the organizing drive that solidified our members rationale that we are better off being union. We had a coal handler fired for backing a dozer into a coal truck on the pile (forcing the union to fight for his job- which he kept), a maintenance man who got three days off for ‘throwing’ a Booster Fan door that was so heavy that later had to have a special lifting apparatus installed to safely install and remove them, or the operator who was almost fired for tripping the wrong fan breaker on an offline unit. Then there is the employee who actually delayed his retirement so that he could vote, “UNION YES”. There are even a few members who remember how the company used Harrison non-union status (at the time) to BUST the union local at the old Rivesville Power Station. These stories are slowly fading as more new people come in and the older people retire.

The ironic fact is that it is the younger workers who need the union even more than the most senior and strongest union supporters who have one foot out the door!

When more than half of America’s workers say they would join a union immediately if they could, but only 10 percent actually belong in one, it’s clear that our labor laws need a serious upgrade. This week, lawmakers in the U.S. House have voted on the H.R. 2474, the Protecting the Right to Organize (PRO) Act. 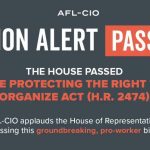 Lawmakers, in 2019, introduced the Protecting the Right to Organize (PRO) Act, H.R. 2474, which would give millions of America’s workers additional protections to organize and negotiate for better pay and benefits, and a voice on the job.

The U.S. House of Representatives have voted on this crucial piece of legislation. But greedy CEOs will do everything they can to oppose working people standing together.

It’s no secret that the right to form a union is under attack. “Right to work” (for nothing)  laws are spreading, while wages have stagnated. More than ever, we need our lawmakers to stand up for working people’s rights—that’s where the PRO Act comes in. It would:

Working people deserve the right to organize and demand living wages, safe workspaces and good benefits—and it’s up to our members of Congress to protect and strengthen that right. Show YOUR support by clicking this link and adding your name to the list of workers who think all workers deserve dignity in the workplace: ACTION NETWORK .