The power of the media to shape public opinion has always been with us since the foundation of our state, as well as our country. You could liken our nation’s founding to a union organizing drive, with all the elements of an indifferent and unresponsive ruler, his cruel and brutal lackeys, brave agitators and organizers who speak out in speech and print against injustice, and those under the thumb of the ruler who dare rise and and demand a better lot in life.

West Virginia was born out of internal strife within our union of the United States due to inequalities between the wealth of the industrializing northern states and the predominantly agrarian, slave holding, southern states. The West Virginia economy was more tied to that of it’s northern neighbors of Ohio and Pennsylvania, so the newly hatched state sided with the Union, with it’s first capital established in our northern panhandle of Wheeling. The reality was that the divide in our country was a bleeding gash right across the middle of our state, with the first land battle famously being fought in Philippi.

No doubt had the Confederacy won, Virginia would have reasserted it’s control over it’s western rogue territory, or, had those forming our state had sided with the southerners, the battle lines for the Civil War would’ve been redrawn and the survival of West Virginia as a separate state would have been highly doubtful. 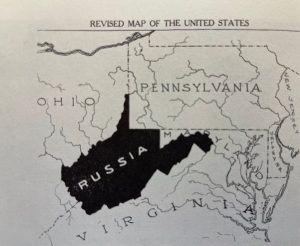 Since 1865, our state has yet to establish itself as an integral part of the fabric of America and distinguish itself with a unique culture and identity of our own. This despite the many famous people born in or with strong ties to our state. Educators Booker T. Washington and Henry Lois Gates; novelists like John Knowles, Stephen Coonts, or Jebediah Purdy; famed aviator Chuck Yeager, WWII Medal of Honor recipient Hershel “Woody” Williams, and Basil L. Plumley who featured prominently in the Vietnam War movie “We Were Soldiers“. We’ve had our share of other famed entertainers and sports figures. Coaches Lou Holtz, Jimbo Fisher, and Nick Saban all hail from West Virginia, as well as entertainers Steve Harvey, Ted Cassidy (Lurch from The Adams Family), Morgan Spurlock, John Corbett, Virginia Egnor (Dagmar), Conchata Ferrell, Kathy Mattea, Peter Marshall, as well as many others.

Sadly, if you ask someone unfamiliar with our state, they will inevitably identify us as progenitors of the Hatfields and McCoys. Those famed feuders have long, and wrongly, been stereotyped as backwards, uneducated, crude, hard-headed, moonshine drinking hillbillies. Anybody actually familiar with the circumstances of the troubles between the two families know it was a tale that included politics, business, and power between two determined and shrewd patriarchs of rugged pioneering dynasties in direct opposition to each other. 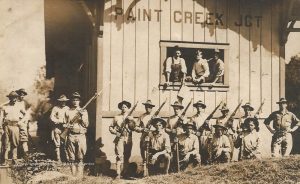 That’s where the story of West Virginia ends, as far as what the rest of the country is concerned. The media has portrayed us by those long set preconceptions, as we labored quietly powering the country by harvesting and selling off our abundant natural resources, with the hard work of our fellow Mountaineers.

It has been said that history is written by the victors, which explains why no other perspective has ever been offered to counter the notion of violent and stand-offish inbreds who sit around on their front porch spitting tobacco and taking potshots at neighbors as well as strangers who dare enter their domain.

Truth is, the Hatfields and McCoys are a relatively harmless and safe piece of our heritage that the media has edited, massaged, and expounded on for easy consumption by the American public. It’s a multi-layered story that can be safely tapped into to siphon off  profit in literature, movies, and by marketing the lore surrounding those colorful characters involved in the long running dispute.

True West Virginia heritage and culture  is firmly rooted in America’s labor history and unions. It’s a taboo subject that those of power and influence have sought to erase, hide, or gloss over in our society.That’s why you get Hatfields and McCoys, not Frank Keeney and Fred Mooney, you get Thomas “Stonewall” Jackson and not “General” Bill Blizzard, you get the “Mothman” and not “Mother” Mary Harris Jones. On a larger scale, there have been a multitude of movies depicting the gunfight at the O.K. Corral, but only one notable film that depicts the Matewan Massacre; plenty of gangster movies showing one group of mobsters against another, while The Battle of Blair Mountain remains shrouded in murky history and legend. They give you Jesse James, when what our nation sorely needs is Sid Hatfield, who battled and died in the service of others and not for his own enrichment; sure, everyone knows the names Al Capone and John Dillinger, but not John L. Lewis, Eugene V. Debbs, or Joe Hill.

So why is such an important piece of our West Virginia, as well as American, heritage being suppressed?

It’s because the “great” industrialists who wrongly get the credit for building our country wish it so. Men like Andrew Carnegie of US Steel, or John D. Rockefeller of Standard Oil, Financier Jay Gould, J.P. Morgan, the Vanderbilt railroad empire, Henry Ford, and many others and their sycophants would have to answer for the crimes they either perpetrated themselves or, as more the case, had their heavily bribed and corrupt politicians, policemen, and thugs. Heavy-handed Baldwin-Felts detectives the coal mines employed as private security, as well as enforcers, and more the same for the Pinkerton Detectives. If these forces were too small, the rich could always rely on a corrupted county or statehouse to dispatch  Sheriffs Deputies and their posses, the State Police, and even the National Guard to beat back workers who refused to be shackled into economic and perpetual slavery at the hands of their employers. 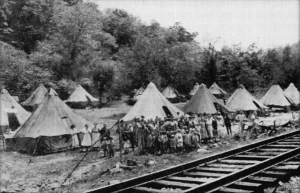 A shameful number of men, women and children were assaulted, maimed, starved, or killed at the hands of employers they served. Here in West Virginia, mothers and fathers were thrown out into the street with all their belongings and left to the mercy of the elements because someone told a gun thug the worker possessed, talked about, or supported the union. These families were forced to the backs of hollers with nothing between them and nature but a thin canvas tent. In those small clusters many died of starvation, disease, exposure, or the frequent bullets that seemed to always be flying around.

Whether it was the Pullman Strike, the Triangle Shirtwaist fire. the Haymarket Riots, the Paint Creek and Cabin Creek strike, the Ludlow Massacre, or many other major eruptions of frustrated and desperate workers, the masters of business and industry would have a lot to answer for. The indiscriminate beatings, destruction of property, denial 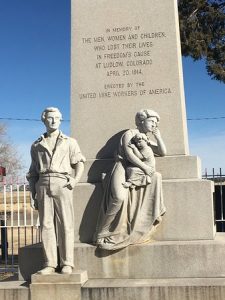 of constitutionally granted rights, subversion, spying, and almost any other indignity that can or can’t even be imagined.

The war goes on today. Powerful forces have used their media mouthpieces, slick political lapdogs, and vast sums of money to pit neighbor against neighbor, American against American, and justify their treachery both in court and in front of the news cameras. All the while they incrementally push the working class closer and closer to the coal camps they left only a couple of generations ago, while proclaiming themselves servants and pillars of Christianity.

How bad is it?

The tern “redneck” used to refer to the red kerchiefs strikers wore to recognize friends from foes, but now it’s used in a derogatory sense to indicate the ignorant and uncouth.  They call trade unionists communists, socialists, and/or fascist to the point that, though describing different political philosophies, the words have mutated into synonyms for each other.

To clear this up, a fascist is one man at the top calling the shots and holding all the wealth themselves. A communist believes no one should be rich, A capitalist believes in oligarchy, made up of many want to be fascist willing to sacrifice anybody as long as it increases their coffers. A socialist has no problem with people being rich, they just believe in a wealthy society no one should be so poor that they cannot live.

Before unions, every employer was a fascist; “my way or the highway.”

Many try to paint unionism as socialist or communism (which is not true since you can’t be either and belong to an American union), but what unions actually do is bring democracy to the shop floor, for every worker equally.

To fight this trend, working people have to actively search and study their missing heritage for themselves and reclaim the rights granted them by the blood and tears shed by men, women, and children for all workers to have a better life for them and their families.

Let this be your New Years resolution!