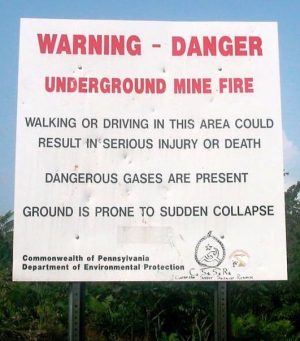 Coal has been around forever, and thanks to new technology, better metering, and better scientific and engineering practices, it’s cleaner to burn than ever in our human history.

There is one coal user that is totally unregulated and free to burn without ANY of the safegaurds and processes used in the power industry and it’s the Earth!

There is a coal fire that has burned underground in Brennender Berg, Germany for over 300 years! The story starts in the year 1688, when a shepherd started a fire in a tree stump that burned to the roots, igniting a coal seam. The translation for the name of the town is, “Burning Mountain.”

Smoking Hills, Canada, is located close to the Artic Ocean, near Franklin Bay. John Franklin first explored the area in 1826, noting a haze that seemed to be hanging in the air. That haze was actually smoke from a chemical reaction between the lignite, sulphur, and oil shales in the area that caused spontaneous combustion. 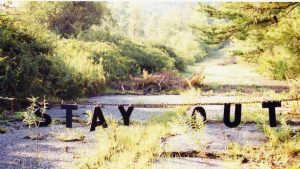 On the other side of the world is Burning Mountain, Australia, or Mount Wingen. Scientist speculate that this underground coal seam fire, that’s 2 meters thick,  has been burning between 5.000-15,000 years.

Closer to home is Centralia, PA, which lies outside of Wilkes-Barre, PA. The town decided to burn down it’s garbage dump in the early 1960’s. Little did they know that there was an exposed coal seam on one side of the piles of refuse. To make a long story short, the seam caught fire, the fire spread underground, and the town had to be abandoned in the mid 1980’s for the sake of public safety. The fire still burns today, over 50 years later.

On almost every continent on Earth, there are underground coal fires raging, unchecked, under the often serene and picturesque landscapes. According to the U.S. Geological Survey, between 10 and 200 million metric tons of coal is consumed annually by underground coal fires. The U.S. Department of the Interior Office of Surface Mining Reclamation and Enforcement spends a billion dollars a year on remediation efforts related to coal fires in our country’s 15 coal producing states.

The real problem is that there is not one specific way to effectively fight underground coal fires. The best scientist can hope for is to identify where the fires are and then try to seal any vents to the surface they can find. They do this with ground penetrating radar and via heat seeking satellites.

Underground coal fires represent a significant hazard to any life that lives above them. In St. Louis, there is an underground coal fire that is moving towards a nuclear waste dump. The nuclear material is the waste byproducts of America’s Manhattan Project from WWII. A lady in St. Louis developed alopecea, an auto-immune disease sometimes referred to as spot-baldness, claiming it was from the emmissions from the underground coal seam fire where she lives.

In Glenwood, Colorado, an underground coal seam fire that has been burning for nearly a century reared it’s ugly head in 2002, setting thousands of acres of forest afire.

Here locally, many locals can identify places that occasionally flare up from underground fires. One recently popped up beside Rt. 250, in White Hall. There’s another just over the hill from the power plant, just before the bridge at Gypsy, behind the log church. More sites can be found on the WV DEP’s website, under Office of Abandoned Mines Land and Reclamation.

The really puzzling thing is that there has been very little study as to the long term health effects and environmental impact of these fires by any agency, nor any patented and effective approaches to extinguishing these types of fires.

It is kind of hypocritical for the EPA and environmentalists to be so aggressive towards coal users and producers, when there are coal fires out there raging unchecked. It would seem to be common sense that a responsible and vibrant coal industry would be the best vangaurd for monitoring and understanding underground coal seam fires.

With all the hostility against coal powered generation, it makes you wonder if the objections raised by environmentalists are genuine concerns or just an avenue for revenue for those who claim to be against coal.

Afterall, the reclamation of mines and the extinguishing of such fires would accomplish removing tons of carbon pollution from the air, employ people in doing that work, and make such lands available for develpment. All of this would act to boost the economy and clean up the environment.

← Why Veterans Make Lousy Job Candidates
Don’t Take What You Have For Granted! →