Moving Forward With a New Attitude!

You are here: Home » Moving Forward With a New Attitude! 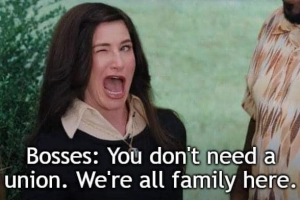 Your union has a lot going on. While we have bargained our next contract, waiting for results of past arbitration  and  preparing future ones, filing unfair labor practices against the company for unfairly jockeying schedules, updating our union’s By Laws, and finding us a new permanent union hall.

Most of all, we are done apologizing for being UNION, and it’s time the membership adopted a new attitude and make this union what we need it and want it to be. The most effective weapon organized labor has in it’s arsenal isn’t the backing of the National, or the lawyers on retainer, or the right to file charges; it is and always will be SOLIDARITY!

You want a better contract, then you have to pull together with everybody else to make it a reality and give our Bargaining Committee the support they need to bargain from a position of strength, knowing the membership has their backs.

While workers across the nation are fighting to bring a unions into their workplaces, there are many union members shamefully taking the road offered them by union busting state legislatures who pushed Right To Work laws on workers. Laws handcrafted by the nefarious American Legislative Exchange Council in nice little ready made packages to kill unions, prevailing wage, and other protections workers have taken for granted for decades.

UWUA Local 304 has to get organized and active in this fight because all of us, collectively, have too damned much to lose if we don’t

Many members are familiar with the United Mine Workers, and lament that we as Utility Workers, don’t strike the same kind of fear in the hearts of corporate America that the UMWA has. That wasn’t gave to the miners, they fought for it for decades. They didn’t ignore the boss when they committed gross violations of the C.B.A., they filed grievances, arbitrated, went to court, jail, and marched in solidarity.

The unions that work in our plant are carefully shielded from 304 members. Why?

That’s because many of the contractors we host in our plant have been union workers for a long time. Management’s worse fear is that Harrison employees learn and start to act like real union workers.

You don’t have to disrespect management, or be hard to work with, but you don’t have to live in fear of them either. You have rights as a union member, but it’s up to you to know and exercise those rights. This begins by knowing your Collective Bargaining Agreement, attending union meetings, and raising hell if you have too.

Right To Work was passed to destroy unions, but we are countering by getting stronger through organization and education of our members, and through cooperation and collaboration with other unions.