The UWUA is a great union. They are not a third party, as they have been portrayed by employers in their carefully prepared union-busting talking points. The UWUA is an organization that is dedicated to making the working lives of their members better.  They do this by following through when workers elect to vote them as their exclusive bargaining representative.

UWUA Local 304 can testify to this. The UWUA was there when we decided to become affiliated with the Utility Workers Union of America, AFL-CIO. They were there when dragging contract negotiations and a pair of votes rejected paltry contract offers and opened the door for an ill concieved decertification vote. They were there when that vote re-affirmed, with results even stronger than the original union vote, that Harrison employees wanted to be Utility Workers.

In the end, UWUA Local 304 members made a choice to trust each other to look out for our own best interests. A seat at the table beats being on the menu!

From the first Authorization card that was signed to the most recent Regular Monthly Meeting, and everywhere in between; the UWUA has never broke their faith in the membership of Local 304.

It wasn’t easy, but through hard work and the assistance, support, and expertise of the UWUA National; UWUA Local 304 defied the odds and is now a functioning and active union. As such, we are fighting for our members, just as the UWUA did for us.

Who’s fights for you?

If you want to know what the UWUA can do for YOU, give UWUA National Organizer Larry Kelley a call at (724) 263-1345, or e-mail him at hemikelley@comcast.net. Each call and e-mail is confidential. Larry will be glad to answer your questions.

Larry was a long time member of UWUA System Local 102 as a lineman, and since then has devoted his time and efforts to give fellow utility workers the same advantage he had during his working career by helping them to achieve their goals of  guaranteeing their future by joining the UWUA.

He’s just one of the many people UWUA Local 304 owes many thanks. Men like Larry, Rich Cossell, Bernie LaBelle, Bob Houser, Sam McKnight, George Manoogian, and all the way up to President Mike Langford; each took a personal interest and was totally invested in 304’s success.  These are just a few to whom we owe our gratitude to. We also made many new friends in other UWUA Locals, all of them dedicated to the purpose of making Utility Workers lives better.

It’s happening at Boeing in South Carolina, Mercedes in Alabama, Nissan in Mississippi, VW in Tennessee, and other workplaces across the country. In the face of a massive “Right To Work” push by corporate owned politicians, workers are finding they trust each other more than they trust billionaire business executives to make each others lives better.

New NLRB rules make it easier, so what’s holding you back?

You can live in fear, or inspire it!  Organize 2 Survive! Make the call! 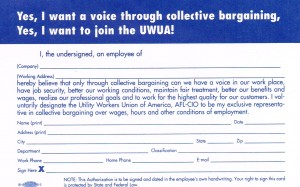